Sorry to interrupt VeganMofo, but the National Book Awards longlist was published yesterday. Usually I am completely unaware of most of the books on the list because I read more foreign fiction, but this time I’ve not only read but also reviewed two of them, The Flamethrowers and Pacific. You can follow those links to my reviews and check out the entire fiction longlist below. The best place for literary award discussion and betting is the forum at The Mooske and the Gripes.

For the month of September, this blog will be devoted to VeganMofo. Tune in while I provide short reviews of some of my favorite, and least favorite, vegan cookbooks. If you are new to Libromancy, please check out some of my non-cookbook reviews, such as my review of Pacific by Tom Drury.

In downtown Portland, before the vegan strip mall was even conceived, was Veganopolis. Veganopolis was a cafeteria-style vegan restaurant. You would walk down a buffet line and fill your plate then weigh it and pay per pound at the end. Despite the casual setting, the food had twinges of haute cuisine, while still being, always, comfort food. The chefs, David Stowell and George Black, came from the finer dining scene, supposedly even catering for the Gores before Al became vice president. To pay $5 for a plate of their enchiladas or bread pudding was a treat.

I often tried to make the delicious meals that I had at Veganopolis at home, with varying success. I attempted them from memory, asking questions now and then as I ordered my food. Eventually, the restaurant closed and David and George moved back to Chicago. Their closing was bittersweet for me because they left with a promise, that a cookbook would be published soon. I waited for two years, occasionally checking Amazon to see if it existed yet. After a while, I stopped checking, then on my birthday I was surprised with a copy of the newly published cookbook for my birthday. The Veganopolis Cookbook, finally!

I was thrilled to see that many of favorite Veganopolis recipes were inside. Finally, I would have the secret of the almond pate and their mac and cheese, the vegan mac and cheese that I use as a standard for others. As I started cooking, however, my enthusiasm was tempered. Some of the recipes, like a Cream of Broccoli Soup, were bland. Others, like my dear almond pate, turned out to be complete disasters, probably because I didn’t have the “masticating juicer” that they suggest using. It seems clear that many of the recipes were the restaurant dishes I had been craving, but just poorly converted for a home cook.

Maybe I am just a poor home cook. Maybe I haven’t tried the right recipes. More likely my attempts just don’t match the meals of my memories which are made brighter by nostalgia.

Is The Conversions by Harry Mathews the book for you? Answer the questions below to find out!

Would you relish stopping in the middle to unravel a page of code?

Can you read French?

Are you sure you don’t suffer from a psychologically unfounded abhorrence to all things Scottish?

Are you such a fan of Oulipo that you want to read a book that even subjects its characters to a constant barrage of Oulipian constraints that they need to overcome?

Do you get a sick pleasure out of reading lists (and does that mean I’m turning you on right now)?

Do you want to know what ‘recrudescence’ means?

Do you enjoy Latin wordplay?

Does metafiction make you sigh with subverted pleasure like a Victorian heroine?

If you answered ‘yes’ to all of these questions, you can borrow my copy, as long as you promise not to get upset about the scrawled “WTF”s that I have all over the margins.

(BTW, Google Books has a preview if you want to sample a chapter.) 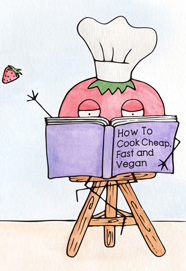 credit to Sarah Conrique and Graham I. Hayes

The Vegan Stoner is a collection of delightfully illustrated recipes produced by the same folks who run the eponymous blog.

They may call it stoner food but I refer to it as bachelor food. It is the type of thing that I ate when I was living by myself and my silverware drawer was full of plastic cutlery that I had stolen from Starbucks. Or rather, it’s what I wish I ate. At that time I did not have the innate sense of how to create something both tasteful and healthy. The Stoner crew, Sarah Conrique and Graham I. Haynes, not only manage that here with lentil topped baked potatoes and carrot pizza but also manage to do it in 7 sentences or less. It’s a cookbook that can get daily use, the kind you grab when you realize you only have a half empty container of almond milk, ketchup, and 4 items in the cupboard and you’re hungry, now!

Surely, this is a situation stoners often find themselves in, but, let’s be honest, they are by no means the only ones.

A loyal fan of the blog will recognize a few of the recipes here. The published book, however, also treats you to the ganja-fueled adventures of a cohabitating group of vegetables. In each chapter there are a few scenes of bead-wearing mushroom relaxing on a bean bag or a grumpy pear smothering his emotions with food. In addition to learning what my life would be like if all of my friends were sentient produce, I also got a glimpse of something more relevant: how much our culture has progressed into foodieism. I own another cookbook targeted at a similar crowd called the Starving Students Vegetarian Cookbook. You know what type of recipes it includes? Beans on toast. In this one you get a vegan Hollandaise Benedict.

I myself am an unabashed foodie. I realize it is politically problematic, but I can’t deny who I am. And despite its reliance on canned goods and shortcuts, the Vegan Stoner Cookbook is one I would be proud to have in my kitchen. If nothing else, it’s the cutest reference for rice and bean cooking times and water ratios in existence.
———–
More?

You can sample the Zucchini Bean Balls and Baked Banana Cake from their book, as well as their adorable drawings, on their blog.

Even more? Here are some bloggers trying out a few recipes: