For the month of September, this blog will be devoted to VeganMofo. Tune in while I provide short reviews of some of my favorite, and least favorite, vegan cookbooks. If you are new to Libromancy, please check out some of my non-cookbook reviews, such as my review of Pacific by Tom Drury. 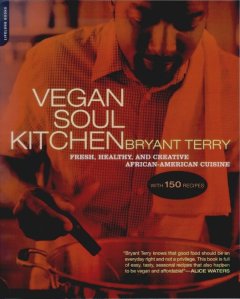 A few recipes and other reviews to whet your appetite:

Citrus Collards with Raisins, Redux: Terry considers this the keystone recipe of his book, the one that best exemplifies what he calls Afro-Diasporic cuisine.

Vegan Noodle has tried a ton of the recipes, with photos